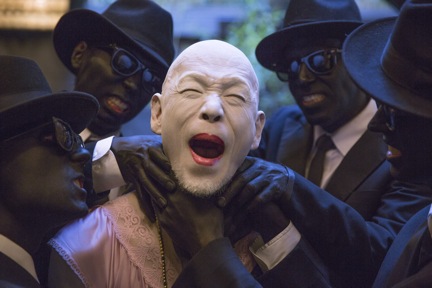 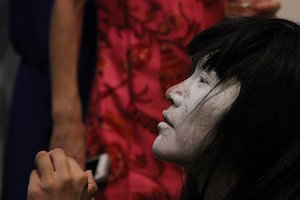 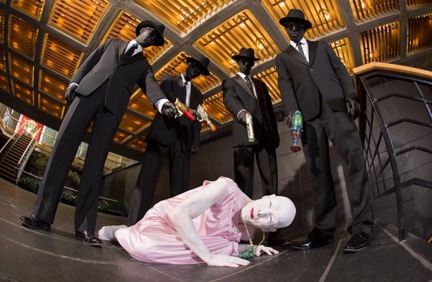 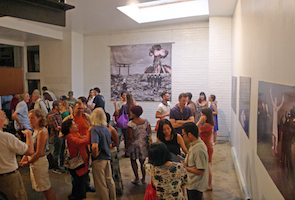 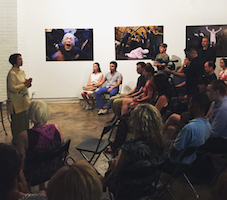 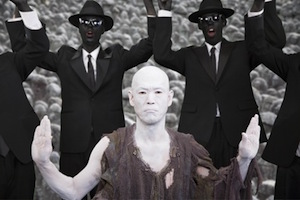 PointB is pleased to present the exhibition The Grasshopper Lies heavy: A Remembrance of Hiroshima 70 Years On, featuring photography and mixed media works by James Carman featuring Butoh master Katusura Kan. In conjunction with the exhibition, there will be a Butoh dance installation and lectures. Featured speakers will include Audrey Kitagawa, President of the Light of Awareness International Spiritual Family, Alan Steinfeld, founder of New Realities and Richard Dolan a historian featured on The History Channel.

As World War II drew to a close, Harry Truman warned Japan: “If they do not now accept our terms, they may expect a rain of ruin from the air, the like of which has never been seen on this earth.” On August 6th, 1945, this statement was actualized when the United States dropped an atomic bomb named Little Boy on the Japanese city of Hiroshima. On August 9th, 1945, US forces dropped a second bomb called Fat Man on the city of Nagasaki. In the ensuing months over 200,000 people died.

Were the attacks a necessary evil or a crime against humanity? If we continue to divide the world into us and them, we will perpetuate this cycle of war and ruin. Is it not time to count all of humanity as brothers and sisters to whom we are responsible, even during times of war? By greeting our so-called enemies with compassion and acknowledging the crimes of the past, we can move forward toward a peaceful future.

To commemorate these historic events, James Carman creates an exhibition of photography and mixed media works. In these works, Butoh master Katusura Kan is seen in all white from head to toe, representing the country of Japan. The Men in Black – secret agents working for government intelligence embody the Allied forces and the birth of the Nation Security State. The photographs recreate the atmosphere of racism and enmity that existed between the two cultures. This photographic series creates an innovation form of storytelling; by honoring the past and reexamining the way that society responds to the residual effects of war.

Japanese avant-garde Butoh dance emerged in the 1950’s as a reaction to the horrific devastation of World War II. Carman was strongly influenced by the Butoh cofounder, Ohno Kazuo, who addressed the need for a new style of Japanese dance performance. Kazuo stated that older art forms, such as Kabuki Theater, were not relevant, during the tumultuous post war era. It was clear to Kazou that Japanese culture needed a new form of story-telling to correspond to the society’s shift in perspective.

James Carman is an accomplished New York based creative producer and director. He has also worked as a cinematographer and photographer since 1989. His feature length documentary, The Hidden Hand; Alien Contact and the Government Cover-up, has won many awards and is distributed internationally. His work has been shown in festivals and theaters around the globe (Sundance, Cannes, Berlin, Toronto film festivals and the MOMA in New York). His short films have premiered at the Berlin Film Festival and at the Locarno Film Festival. James is a member of the Producer’s Guild and is currently producing a TV series Superconscious, exploring the potential of human evolution.

Azumi Oe was born and raised in Kyoto, Japan. Since arriving in New York, She received Butoh training from mainly Vangeline, Katsura Kan, and Yukio Waguri. She performed as a principal dancer of New York-based Butoh company Vangeline Theatre in many festivals and events in the US. She joined as an assistant choreographer and main dancer for Katsura Kan’s several tours in US, Central America, China, Russia and Europe. Her solo piece “UtsUtsU” was presented in Boulder Butoh Festival, Solioquios y Dialogos Bailados Festival in Mexico, also performed two solo pieces in “Journey of Spirit” directed by Yukio Waguri. Her Newest piece “ObsidianismO” was presented at Eurasia Butoh Festival tour in Beijing, St.Petersburg, and Helsinki. As well as she worked as a performer and a project assistant for Katja Loher’s Video Sculpture series with choreographer Saori Tsukada, most recently she works with visual/performance artist AYAKAMAY’s performance art projects. Azumi is constantly at work on wide range of collaborative, solo and experimental dance project with the hope of growing as a creator.